Is Tobacco Flavour really the most popular?

Yet again this entry was provoked by a twitter conversation(if you are not on there you should try it!) and was a request for flavours,used specifically by UK Vapers from Lorien J . This,as is usual on twitter produced a flood of information exceedingly quickly. However,some glaring differences quickly emerged, that shall be what I highlight,and examine the possible causes and implications. 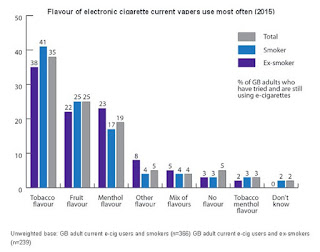 This implies in this survey of 605, that tobacco flavours are clearly the most popular in sole(n=239) and dual-users(n= 366).However,this data would not agree either with perception of the market,or more definitively with studies, but it is acknowledged in the document that less than 5% use e-cigarettes without flavouring 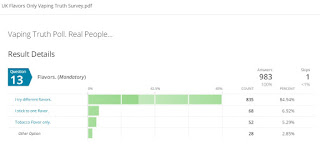 This  data was accrued from a combination of Twitter,Forums and Facebook , yielding 983 results from the UK(out of a far larger World-wide Survey of 7300)

Here it states that only 5.3% solely use a tobacco flavour,with approximately 85% using a variety of different flavours on a regular basis  Anomoly 1

To an untrained eye,this data appears misleading at first glance,but clearly shows that tobacco flavours are used by 1984 people out of a total of 12,909 who responded (15.4%)  Anomoly 2

This data at initiation shows a marked difference, to single out tobacco flavours 3118 users out of a total of  8607(36%),this figure appears more consistent with ASH data

Sadly this led to a wild goose chase,with nothing of value discovered on flavours * 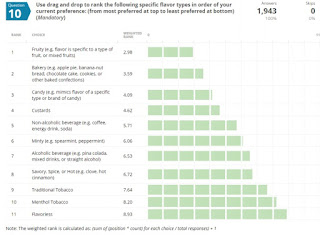 I could continue in this vein,but minimum research(simply from the afor-mentioned tweets via Twitter) allowed me to get to this point.A far more detailed approach is required to fully myth-bust, but this at least confirms a few doubts and suspicions.

As we are all aware, flavours are a very important factor to the success of e-cigarette users in Relapse Prevention,Initiation, ASH acknowledge this with the afor quoted <5% using unflavoured liquids. This information is important to regulators. In the last survey cited, 94% stated that flavours were either very important or important to the user

However,some regulators such as Finland wish to ban all flavourings in e-cigarettes,this is only a hunch but do they mistakenly perceive that unflavoured e-cigarette juice has a tobacco tasting flavour?

Why do the anomolies exist, is it statistical error? :- I agree that some of the data collected here to demonstrate this point was not UK specific, but I did not cherry pick the results, they were simply the first to be located. There may be a selection bias from where the anomolous data was collected(typically enthusiasts),so is the ASH survey representative of the general population with a sample size of 605?

ASH should undertake another far larger,more detailed and probing study forthwith(ask NNA or ECF etc for assistance in study question design). ASH appears broadly supportive of e-cigs,consequently, enhanced data would most certainly be advantageous to all concerned, especially as they(ASH) are referred to as a credible information source .

Dr Farsalinos Flavour submission to the FDA request for comments 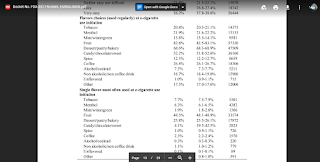