There appears some resistance in UK Government circles,and other influential sources,to acknowledge the concept of long-term e-cigarette use as a method to maintain  tobacco smoking cessation.

It is totally inconsistent that NRT can be approved for Relapse Prevention,but the same logic cannot be applied to long term use of e-cigarettes. What is the desired  Public Health outcome from any method ....  maintaining Smoking Cessation!

This is not simply a lifestyle choice,but one of actively preventing the all too easy relapse back into smoking,that remains a possibility,especially in an overly restrictive regulatory regime.

For anyone who has used e-cigarettes for any length of time in a relatively(to date) free market,this is probably highly unlikely,but requires no further elaboration at this stage.

So is our government attempting to limit the recommended usage of all e-cigarettes,or just the ones purchased as consumer products?

Will the MHRA approved nicotine inhaler- the VOKE be also subject to restrictive long-term usage recommendations,or indeed any other 'medicinal e-cig'(if such a product was ever was allowed to appear)?     Of course NOT!

** there are of course exceptions

Should consumer-products have artificial term usage restrictions placed upon them without justification?

Does relapse prevention depend on 'approved -products'. It most certainly should not !

Just as an aside,I wonder if all of the methods of smoking cessation could be compared,with follow up surveys monitoring 12 month users(minimum),over a period of time(3 years). I would wager that Vaping would have the greatest success rate of relapse prevention,this is supposition of course.I wonder when millions of £$ are squandered on largely pointless research projects(eg monitoring social media),why such a survey is not attempted. Some agencies of course do not wish for such information,preferring to attempt to keep the genie in the bottle.

NICE needs to update its advice post haste,and that Government Officials need to take a far stronger positive lead,rather along the lines of Public Health England.Harm from long-term use has not been demonstrated,advice(+/-) could be amended accordingly over the coming years.The failure to adopt a more pro active approach at this stage will result in more harm than good.Doubts instilled into a generally misinformed public regarding e-cigarettes,are not well served by sensationalist and inconsistent media coverage.

Whilst caution can be expected from our regulators,they must consider the consequences of inaction or indeterminate delay.Assessing when long-term data exists,sufficient to recommend e-cigarettes as a valuable relapse prevention tool is the crux of the matter here.....Does this exist already?

Generally,the golden opportunity offered by e-cigs to solve the smoking epidemic around the World could be squandered,overly cautious bureaucrats and regulators,lacking in foresight or the will to ignore largely moralistic non-scientific arguments,(and blatant propaganda from certain organisations)must take note.

As is usually the case,existing long term vapers may well be self-sufficient (worryingly,maybe via the black market),when grossly inappropriate and disproportionate regulations are introduced from May 2016(TPD).However,existing smokers need some unequivocal positive encouragement to switch to e-cigarettes from the government,with the message effectively conveyed to the public by advertisment campaigns,not just a web-page entry.

The issue of long-term use must also be resolved by Governments,it is perfectly clear that the vast majority of existing long term users have zero wish to desist from using their relapse prevention device!

As a final take from this,please try to instil in any who are prepared to listen,the concept that Relapse Prevention is what we are participating in .......not just simply enjoying ourselves,since the discovery of what is a more pleasurable,safer way of using nicotine :-)


Updated (And  arguably should be a different blog entirely) - read on at your peril! PLEASE just take the main point from ABOVE^^^^^^^^^^^^^ 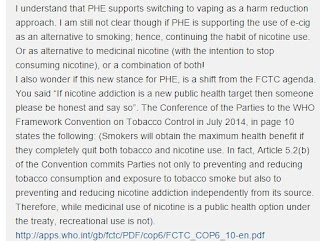 I shall not name the author of this commentary, but it certainly introduces yet another element, overlooked by myself into this debate:- WHO.

I believe (possibly incorrectly) that this is advice and not obligatory for Governments to adopt.Certainly the advice is a polar opposite of what the majority of ~50 million Worldwide consumers probably desire, the largest fear I would suggest from all users is relapse back to smoking.

However,WHO seemingly accept the medicinal use of nicotine as a public health option,but not for relapse prevention (not recreational)use. This is clearly a problematic subject, that needs far more open transparent debate from a secretive unaccountable organisation.

Prof Michael Russell outlined  the obstacles placed in the way of nicotine replacement as far back as 1991. Has much changed since then?

Surveys undertaken have repeatedly indicated that at least 50% of the population(and rather surprisingly doctors also), have a totally incorrect perception of the harm and dependence potential of nicotine, when not associated with combustible tobacco. Calls for national debate remain unheeded from many sources regarding the harm and benefit

As Etter and Eissenberg established ,the dependence levels of electronic cigarettes were on a par with nicotine gum ie 'not very' so why is this a concern?

This reinforces the paradox regarding long-term usage of NRT and e-cigarettes,to this author, this has neither a scientific or rational basis.

Professor Jason Hughes (Leicester Uni Dept of Sociology) argues that  restrictions will be applied due to social pressure rather than healthcare issues .

Complete Nicotine Cessation appears to be the misguided, and unachievable objective of WHO.

This is totally counter-intuative and at odds to achieving Smokefree targets in an acceptable timeframe,without attractive viable alternatives readily available.

Attempting to remove or restrict the use of a popular and effective smoking alternative, that plays a similar role as NRT in relapse prevention is narrow sighted and foolhardy.

A very recent article encapsulates many of the moral arguments regarding nicotine use, in its case for banning smoking, in this authors opinion there is absolutely no requirement for such drastic action.

This would in all probability be doomed to failure, causing much angst in the process,with a thriving black market and a dissatisfied group of smokers.

Smoking could be eradicated without coercion,whilst maintaining choice, IF all influential bodies concerned adopted a more positive approach towards e-cigarettes.

Many schemes to assist switchover could be advanced,however this is a radical departure from the 'norm' with a few notable exceptions eg

Hertfordshire Public Health Director :- Jim McManus -How etc Which is a remarkable  and hopefully seminal account of his transition from sceptic to advocate, this should be compulsory reading for all engaged in Public Health.

And, far more scholarly papers exist that expand upon this concept

Another powerful well made call for WHO to adapt its very limited approach towards Nicotine  is made,outlining a far more visionary approach

I am unaware of the gentleman concerned,but how prevalent is this attitude and approach?

Neuberger appears in this excellent, blog with his conflating  'E-Cigarettes A Wolf in Sheeps Clothing', singularly failing to recognise that the tobacco and independents(of tobacco) are two distinct entities.

Is this part of a concerted campaign highlighted here ? 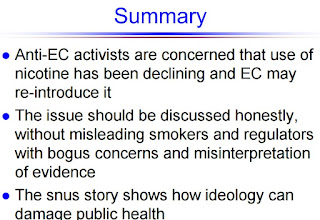 A completely unrelated graph ........ what is its point?  its one of the many areas where zero proportionality is applied to by opponents, seemingly for mischievous purpose. 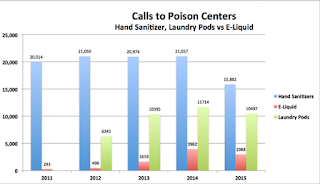