One observation that I have discovered over the last 4+ years(since stopping smoking), is the  illogical advancement of one cessation method over another ......I am excluding e-cigarettes and smokeless tobacco products from this debate (for now)

My early-teen smoking experiences were with Capstan Full Strength, Players Navy Cut or woe betide  me Woodbine, these were all unfiltered cigarettes and all very high nicotine (and tar) products. After trying a few filtered products, I found I preferred to use them, not for any notional tar -reduction but the fact that I didn't get a mouthful of fine tobacco, if I was careless placing between my lips.

For 40+ years I happily puffed away in blissful ignorance of the so called science surrounding the filter apart from the very brief experience of  using Silk Cut which I found worse than useless, and either covered up the filter perforation holes or removed it entirely.

I make no apologies for giving you a potted version of the Beard smoking history, especially when the latest hobbyhorse from some quarters is the Very Low Nicotine Cigarette(VLNC) advanced by such groups  as Aspire 2025 , Tobacco Free Kids , Truth Initiative (formerly the Legacy Foundatiom) , Centre for Tobacco Control and Research at UCSF

The reasoning behind VLNC is eviscerated by Dr M Siegel here

Why do certain researchers and institutions come down in favour of one method,when as anyone who has gone through the experience of stopping smoking, can give a very detailed account of what worked for them, imagine a smokers version of 'The Wisdom of Crowds'!A cocktail of varied methods is the solution, humans tend to be like that -we respond differently to stimuli,some are more appealing and effective than others.

Clearly no coercion or nagging should be involved in smoking cessation, smokers have a very strong and well deserved reputation of 'digging their heels in'

From this authors point of view, simply give smokers  detailed,truthful, factual advice(if requested by them!). Also as wide an assortment of attractive smoking alternatives as possible, plus the traditional NRT and medications readily available, and simply allow freedom of choice.

Why should that be such a difficult concept? It is beyond my comprehension how and why puritanical approaches exist in a supposedly sophisticated 21st Century, tolerance,empathy and understanding appears in short supply whenever nicotine is the subject.

The very concept of VLNC is totally flawed,

1) Existing smokers have largely ignored VLNC forerunners(lights) in the past,what will make that change?  the market should not have government intervention when the harmful constituents in smoking are the smoke and tar, not the nicotine.

2) 'None of the pleasure for all of the harms' is the answer from any existing or ex-smoker who universally think this approach doomed to failure.

4) Black market would most definitely thrive if VLNC forcibly introduced

5) Adolescent access to the 'scourge' of nicotine would not be addressed by this - they are resourceful!

6) There is a wealth of knowledge from 'laypersons' ie existing or former smokers that could and should be consulted (not lip-service) by researchers if they are wanting practical solutions that would have the chance of success.

8) Watching two GFN video which are complementary towards VLNC  are here by Donny and by Hufford  present a somewhat compelling case, if taken in association. They present a solution that may be workable, but at what cost to freedom of choice towards existing smokers, this confuses this author greatly, as it's a moral minefield.

9) Apologies to any reader getting this far, this blog was written months ago,and updated at least 3 times, so it may well appear very disjointed with a mish-mash of thoughts and facts tossed in at random

10) Highlighting the possibility of the above point #8, If VLNC was to be a success, I believe they could be introduced with a huge financial incentive(ie very much cheaper than traditional cigs), a refund of the costs of using (if cessation demonstrated at say 12 months), but most decidedly no coercion involved towards smokers, choice remains the key in this 'debate'.

Finally,talking of hobby-horses and ideology I really cannot forget the retired Sydney pensioner who eschews and denigrates anything other than 'cold-turkey',despite its abysmal success rate. He as per usual uses deception to advance his theory 'unassisted cessation remained the preferred and most successful method among smokers' - It is the most used method, but most definitely the least successful method, despite desperate attempts by colleagues to demonstrate otherwise who merely observed in their telephone survey of 1097 that 'cold-turkey' was most used.

from these VCBH Conference submissions  see #16 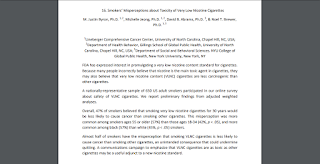