Dick Puddlecote immediately covered this in his own inimitable style here

There's A New Idiot In Town

I for one expected that would be the last we heard about this from the new head of the RCGP(Royal College of General Practitioners)  and here  .

But no, thanks to interventions from the likes of Lord Hunt (also President of RSPH) and presumably behind the scenes anger from RCGP members. 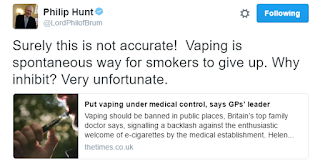 A mini retraction was issued by the lady 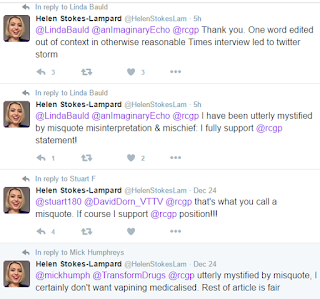 If one looks at her original quotations in the Times 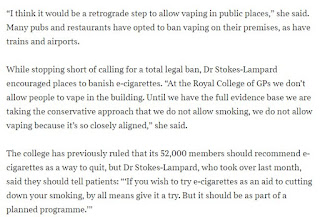 Irrespective of whether one word was a mis-quote, taken out of context,the nature and tone of the quotations are perfectly clear to any reader,and what prompted my blog..Helen has badly misjudged here, and a speedy retraction and clarification is most definitely required. Whether through Chris Smyth the Times journalist, or via her own RCGP blog to confirm the agreed policy,either avenue needs pursuing asap.


The recent RCGP policy position was announced less than one month ago,and was commented upon in a previous blog which noted that every single respected Public Health body was e-cig supportive,with the exception of the BMA and a few noisy renegades.

''To vape or not to vape? The RCGP position on e-cigarettes''

The timing of this article in the Christmas- New Year  peak resolution period to Stop Smoking is particularly unfortunate,specialists in this field of study will be dismayed at the apparent naivety displayed.I could fling further mud at Helen, regarding her recent forays into the mass media.However that would be counter- productive,but I strongly suggest that she takes the wise and honourable step of a full retraction to clear this particular sorry mess up.

To conclude this,I leave this short but very cutting comment.

PS***
My commentary assumed naivety and inexperience from Helen, and thus was of a charitable nature.However,there was a clear similarity in her commentary with that of the Public Health renegade element I mentioned earlier.If Helen has fallen under their influence, I suggest a rapid rethink is called for, as they are becoming increasingly isolated,so back the righteous and winning horse,....'You decide' !

As another update this confusion at the RCGP resulted in this video from BBC South on the 4th January  the in video commentary was annoying, the accompanying general public comments truly mind-numbing in their ignorance and lack of empathy. 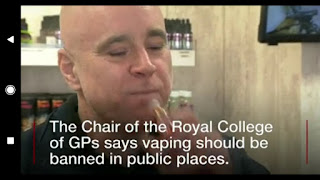 **** noticed 26/7/17
Further updated , the RCGP website has removed any reference to the policy position from November that was 'reasonable' and any search on the website => fault page,..... thus leaving the commentary from Helen as the ONLY resource from RCGP covering the topic of Vaping. Does this adequately cover the complexity of the topic :- 'You Decide'
Posted by Alan Beard at 10:40 pm