Firstly,
I am not a vendor and so claim zero expertise or deep knowledge on the details of running a successful business, but as a consumer directly influenced by their current and future viability these thoughts are directed towards them.

I do not propose to rake over the sad history of how and why TPD2  evolved as it did, or bleat about how the MHRA is implementing such as this, despite Lord Prior stating 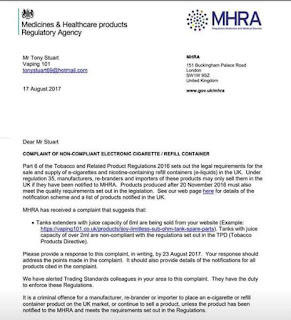 'It's obvious that without consistent, professional and unified industry representation vaping will face continual challenges.''

More to the point, how to convince this disparate industry that without a well-funded professional body the future is not good?''

The disturbing reality is that out of 2000 vendors,equipment manufacturers,juice makers....etc there exists only a tiny number who are involved or members of a trade association

see ECITA , IBVTA and yes even the infamous TVECA , also a newer entry UKVIA for current UK membership numbers *please note,no details of subscription costs are included in my blog*

whilst some of the big players are contained here,there are vast numbers who are not involved whatsoever. Again, I don't want to now start a long script extolling the virtues of belonging to a trade association other than saying 'strength in numbers, helps to protect your business', 'helps to guarantee the quality of the ''product'' and to avoid rogue traders'.................

It is inexplicable that vendors have not joined up, and a false economy to save upon the membership fees, when the very future of their business is in the balance.

Maybe controversially, I shall advance a thought that all vendors should  belong to a trade association (of their choice ), on a compulsory basis. I am a libertarian by nature, but something along these lines has to be at least considered, before regulators decide that for you.

Licensing(of e-cig outlets) appeared in recent Welsh and Scottish proposed legislation,inevitably this will be passed eventually.This is but one example of where a meaningful 'lobby' that a strong trade association could represent, may help favourably frame the debate with legislators.

The same circumstances exist in the US(and elsewhere), with the same unwanted outcome expected so fgs. Get yourselves organised NOW!

** I regularly listen to Dimitris  on here  bemoaning the lack of vendor involvement in the various state trade associations ** so the problem is far from unique to the UK
*** Further updated 2021***
I am reliably informed from one of the Trade Associations that they now estimate that 75% of all businesses now belong to an Association(by volume), but still only 10% of business belong to a Trade Association,  with membership packages from £600 pa.(up to 4 shops) that seems a foolish economy.