I must state from the outset that my conversion from ciggies began in February 2013 on a nicotine level of 24 mg/ml and  continues at the same strength to this day. All advice given in those early days from any respected source (forums) stressed that at least 18mg/ml or higher was required for a successful transition

These results have been obtained by kind permission from Kevin Crowley whose excellent ongoing survey I highly recommend everyone to take part (note current info relates to ~2700 persons) in https://vapinglinks.wordpress.com/2015/06/22/the-vaping-truth-survey-is-now-live/ 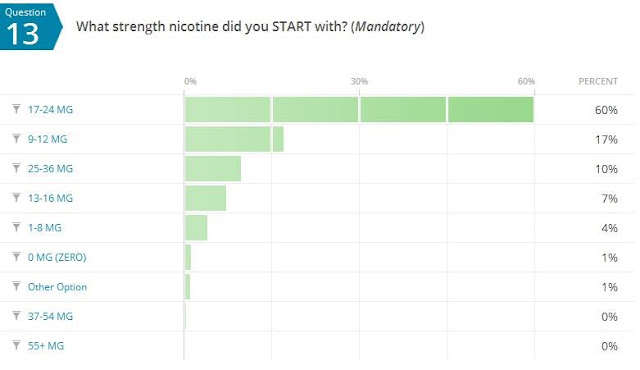 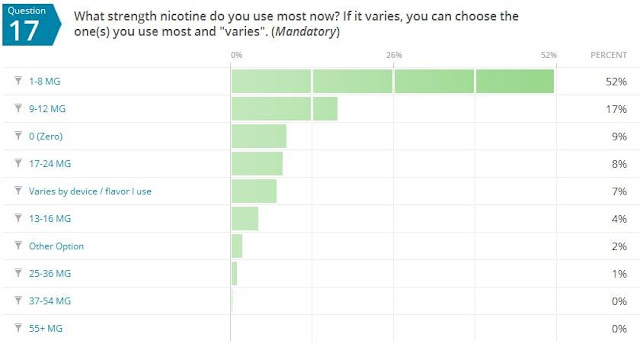 The above shows a vast amount of information but the most remarkable is the massive change in user nicotine strengths.

Liquid manufacturers and vendors statistics confirm this is happening(sales data) , its not as a result of  panic over impending draconian and illogical regulation this is a consumer led evolution .

Or is it ? read Paul Barnes excellent blog http://fdm.ukvaping.com/2015/07/what-are-we-fighting-for/ are vendors and manufacturers driving the, or reacting to, consumer demand?

( I am sounding like this guy now https://www.youtube.com/watch?v=SvfTa_B3hGA so will promptly shut up)!

So maybe its the rapid evolution of the products that researchers such as Ann McNeil have noticed and done preliminary studies http://www.kcl.ac.uk/ioppn/news/records/2015/April/New-e-cigarette-research-on-type-and-frequency-of-use.aspx  BUT this omits that devices have  further evolved,  to be far more efficient at delivering satisfying results via reduced nicotine concentration liquids,This highlights the problem for researchers, struggling to produce current real world data in a rapidly evolving market.

So what are the consequences ?

1) Probable increased usage of e-liquid in the latest high-end devices(high wattage possibly temperature controlled) with 'sub-ohm' tanks, using a low nicotine concentration content, as users self titrate, probably to the identical total of daily nicotine used(guesstimate). This in itself should not be especially harmful but just may increase the possibility.

2) Advice to new switchers is a very important and  a problematic area, should folks give advice as in the opening paragraph ie relatively simple devices that require high nicotine concentrations, but becoming  increasingly unavailable and will be regulated via the TPD to 20mg/ml (barely enough to satisfy new switchers)

Alternative advice could be to suggest the latest high powered devices and tanks but this avenue has many potential pitfalls.

3) Kevin's survey (below) shows 25% of consumers who either currently or could mix their own liquids, this has increased enormously over the last few years as the numbers of experienced users has multiplied.

May 2016 in the EU will see the TPD introduced with mixing supplies under direct threat regarding  bottle size restrictions and usable strengths. Obviously the survey throws up many other unintended consequences, the most disturbing for regulators should be the first two on the list, especially 'Will go to the black market'.


4)Regulators,advisers and their researchers appear ill informed in many aspects eg market share http://alanbeard.blogspot.co.uk/2015/06/e-cigarette-market-myths.html current,factual
information is required to aid their comprehension of smoking harm reduction. However, opportunities can be totally overlooked,due to misinformation,poor advice and possibly hostile external influence. For an eloquent plea to her own legislators read http://www.scoop.co.nz/stories/GE1507/S00032/is-nz-ready-for-consumer-driven-quit-smoking-programmes.htm this summary from Professor Glover